Many Indian cities are a jumble, a mix of the ancient and modern, but nowhere can ever be compared in this regard to Varanasi. Banaras, yes the place which has a history of battles and spirituality since the time of Vedas. And till now the in the recent election the Prime Miniter of India fought for the Parliamentary seat from the Holy city Banaras.

The wonders of city stick to its mystery and the warmth it provides.

“Banaras is older than history, older than tradition, older even than legend, and looks twice as old as all of them put together.”

A visitor to Banaras can experience the birth of life and the diffusion of the body into the five elemental forms at Manikarnika Ghat. The spirituality centers around the dingy narrow pathways of Banaras city. The life of India is the Banaras, as it is believed to be the abode of Hindu God and Goddess.

So not explaining by words more let’s take a tour to the History of Banaras in this video.

My friend Shifani from Sri Lanka visited this vigorous city and with her luring experience, explains it all in this shot snap.

Yet let me begin with sites you should not miss if you happen to visit this “authentic city of India.” The culture will let you know the most important side of the country. Here Is some information about places to visit in Varanasi.

Places to Visit in Banaras/Varanasi

The ghats of the city of Banaras are not just the source of merchandise and business but they are also known for its beauty during the evening aartis and prayers. This has been the attraction of many tourists and the people who visit this place and get lured by the hues of the ghats at different times of the day.Here is some list of ghats of Varanasi.

1. Assi Ghat, The Mysterious Part Of The River Ganga And The Ghat of Varanasi.

As said before the city of Banaras is more than the words because you have to visit this place. It is a kind of magnet which attracts a bit of an individual’s spiritual self. A small world lives in this place as many foreigners live in this place along with a lot Indian.

The chaos and the jingle of the evening bells speak the liveliness of the ghat. Assi Ghat is the southernmost Ghat in Varanasi. Here the pilgrims worship the Linga roop of Lord Shiva which is situated under the peepal tree. It allures visitors with a most magnificent Aarti making it one of the most beautiful city to visit in India and also the beautiful ghat

If you are frustrated with your life this Ghat will teach you that you have a life to live. The place where life seems to end with the cremating bodies energize the soul with the new flow of energy. Nothing is sacrilegious here. All beings are equally going to merge with the 5 elements of the universe.It is one of the most interesting ghats in Varanasi.

Describing feeds with a different experience so one has to go there before you die as experiences are self-built especially in a place like this.

Describing feeds with a different experience so one has to go there before you die as experiences are self-built especially in a place like this.

3. Dashashwamedh Ghat: Vibrant Ghat In Varanasi And The Country

It is the most important Ghat in India on the river Ganges for it had been connected to legends which will remain immortal. The Ghat is known for its spectacular Ganga Aarti. The jingles of bells and the song with traditional instruments embraces the evening time. 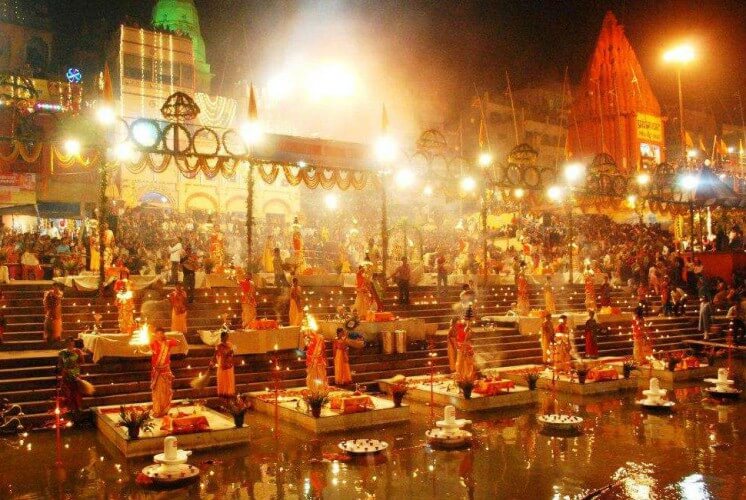 Lord Brahma is credited to build this Ghat to welcome Lord Shiva.

Situated near the Vishwanath temple this Ghat of Varanasi is the most vibrant and attractive site of the city. Close to this Ghat overlooking the River Ganges there is a very famous observatory Jantar Mantar built by Maharaja Jai Singh II in 1737 which also a great tourist attraction.So these were the list of Varanasi Ghats.

4. Kashi Vishwanath Temple – The only Jyotirlinga in Uttar Pradesh

This holiest city is blessed with one of the Jyotirlingas i.e Kashi Vishwanath Temple. And if this place isn’t on your list while you plan to visit this city then you will miss the muddled solution the country provides for. For then you will know India and its Hinduism which has a universal appeal as E.M.Forster in his novel A Passage to India put forth in the third part of his story about India and its People.

Vishwanath means the Lord of this universe, Lord Shiva is the Universal God according to the Shaivism which is followed here. Here in Kashi temple, we have Aarti’s five times a day at different intervals of the day.

History of destruction by Aurangzeb and its renovation is very popular. As there exists a Gyanvyapi Mosque in its premises. The last structure was demolished and then it was restored by the Maratha ruler, Ahilya Bai Holkar of Indore in 1780.

The place has its importance as Tulsidas wrote the epic religious work Ramacharitra Mana here. This epic was written in Awadhi dialect. 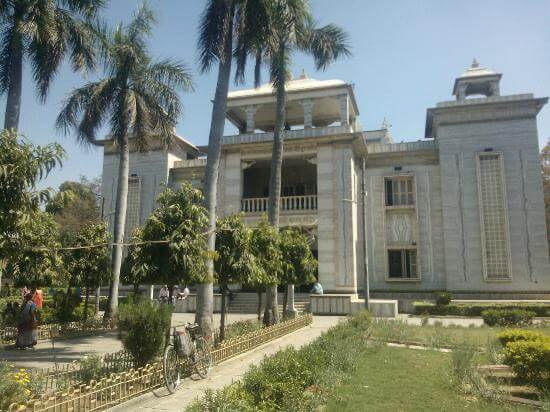 This temple was built later which was funded by Seth Ratan Lall Sureka of Bandhaghat (Howrah) and the verses of the epic have been engraved on the wall. Because of this, the Sanskrit work Ramayana by Valmiki could have been accessed by local mass.

The 18th-century temple built by Bengali Queen is of great importance as it is believed that the idol of goddess Durga was not built. It came into existence on its own, actually appeared. This temple is also called Monkey Temple.

The temple was built in North Indian Nagara style of architecture. The temple was painted red with ochre to make the central idol of Durga look similar.

Other Site Seeing Places In Banaras

The city has seen empires an thus it has remnants of different times. These are few places that you should visit other than its religious sites. As Banaras is more than its history and legends of Hinduism. 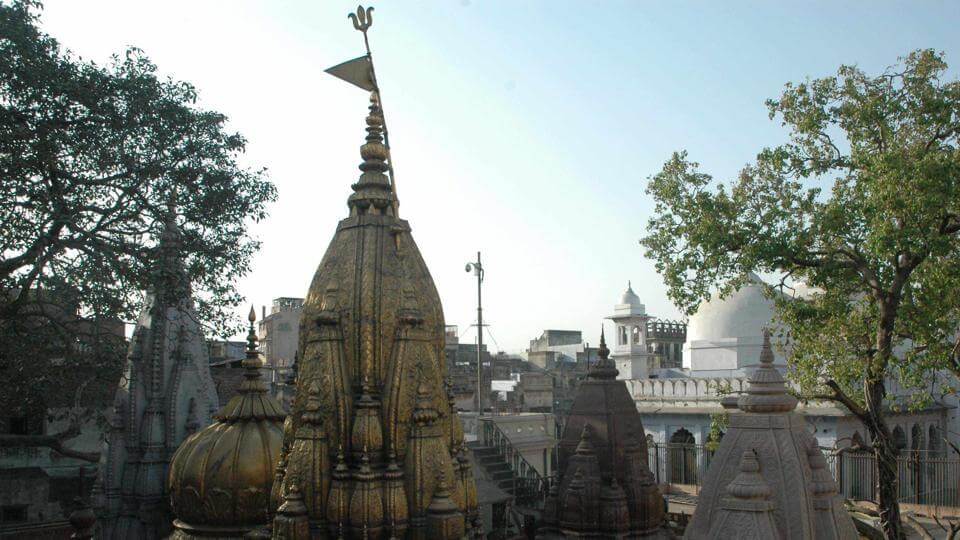 A part of Gyan Vyapi mosque this well was considered more sacred to Hindus as this mosque was built in the demolished part of the Kashi Vishwanath temple. It is thought that the there is Shiv Linga inside the well and the water is purer than the river Ganges.

This well is said to have a  Shiv Linga.

Ramnagar Fort, Opposite to Tulsi Ghat is a place where you love to have an afternoon stroll. It is at the scenic location of the eastern right bank of the river Ganga. The royal family who owns the fort; the King of Varanasi still lives here.

It is known for its creamy colored Chunar sandstone. It looks magnificent and the crimson sunset as viewed from inside the enclosure makes it a different structure in this holy city. 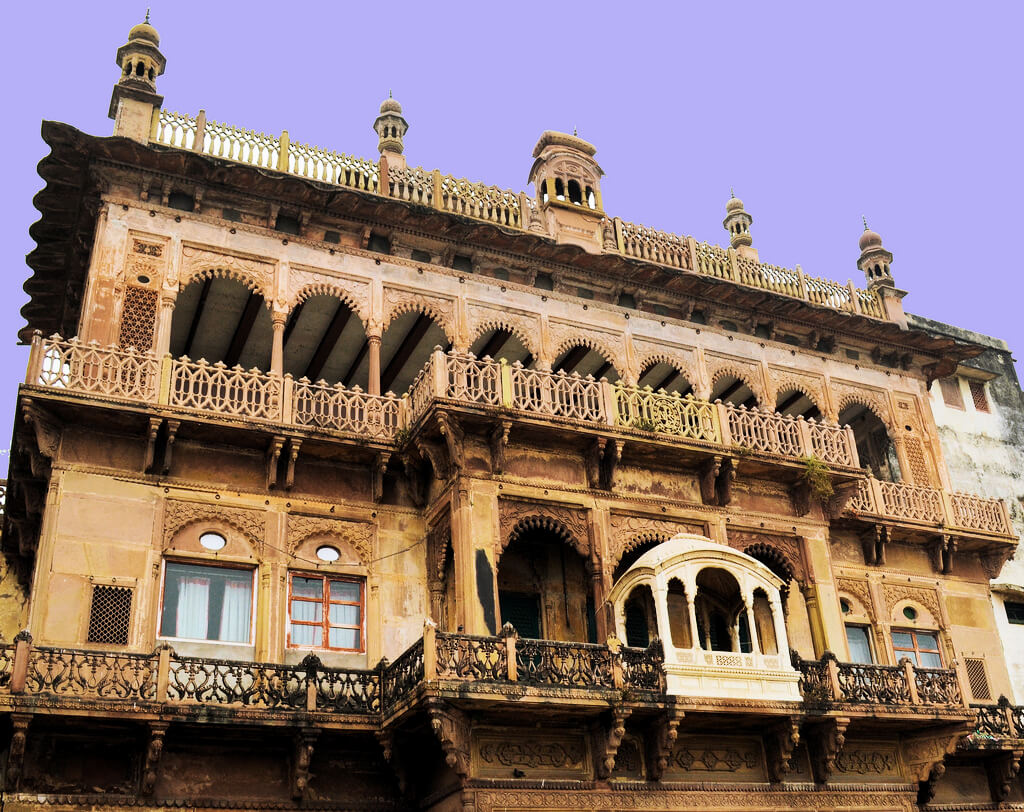 The Museum also is known as the Saraswati Bhawan. The old ramparts of the fort are the home to preserve the vintage, rare and unusual collections of American vintage cars, bejeweled sedan chairs, ivory work, medieval costumes, gold and silver brocaded royal Palakis. It has all the royal jewels,  elephant saddles carved out of silver, jewelry, costumes made of kimkhwa silk. In fact, there are manuscripts also preserved in this museum, Some illustrating the Mughal ethos. 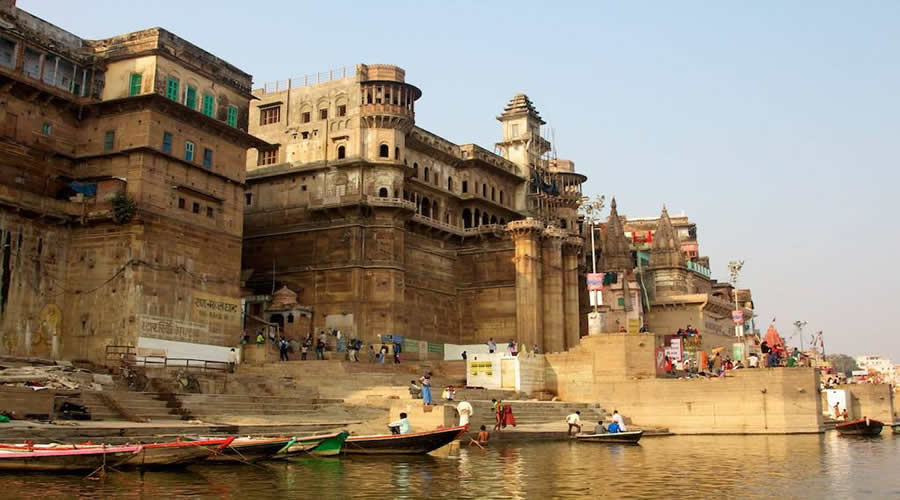 Also known as Chandrakanta Chunargarh and Charanadri, is located in the Mirzapur district of the state along the rocky Ganges. The fort’s history traces a very long period from 56 BC to the present time. Thus one can believe the Vikramaditya of Ujjain to Sher Shah Suri, the Mughals and the British have seen and used the ramparts of the fort. The impregnable citadel was built using local sandstone. And so it looks so spooky for it being antique. The fort is believed to be divinely blessed and is among the popular places to visit in and around Varanasi in one day.

It is a very important Buddhist pilgrimage site. It is here that Lord Buddha first taught the Dharma after his enlightenment. Here the Buddhist Sangha came into existence through the enlightenment of Kondanna.

Sarnath stupa is also called Isipatana, one of the four places that all the Buddhists should visit. For those seeking peace and solitude after jostling their way through the frazzled ghats and gullies of Kashi, should visit this place.

Other places which you can give a chance- Alamgir Mosque, Man Mandir Observatory, Bharat Kala Museum.

You should not miss the markets of Banaras city because it gives a variety of things which can become your memory of the place. At a very affordable sometimes too meager amount you can fill your bags So these were the list of the Varanasi places to visit and Varanasi India point of interest. 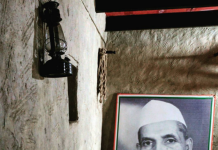 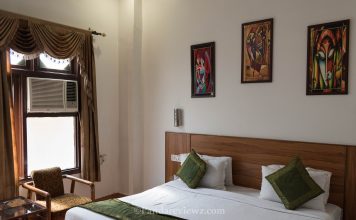